I have a confession to make.

I’ve been to Organic Energy twice in two days.

Speaking of twice, I’m blogging twice in one day to catch up on all the eats we’ve missed.  Yesterday was my first day back in sol-town after being in Minnesota.  I had some seriously deelish eats.  No new recipes, though, since I’m leaving for Chicago tomorrow 🙂  And you better believe that’ll be a fabulous food recap!!

The mumsy and I went to my favorite restaurant, Organic Energy (of course) for lunch (twice).   It’s always so hard to decide what I want!  They have unreal salads, rice/noodle bowls, and sandwiches, but best of all are their soups and specials.  Everything is so fresh and homemade. My fave.

I’m doing this thing where I force myself to get something new every time. So this time was the Ganesh Rice Bowl– chickpeas, carrots, spinach, red curry sauce, sprouts and brown rice.  This was soooo good.  Very filling.  The sandwiches always come with a little sampling of black bean salad or whatever salad they have that day, and since I didn’t order a sandwich, I had to ask for one of these babies.  And I was so glad I did.

the side dish of all side dishes

Black beans, red onion, bell pepper, cilantro, zucchini, carrot, you name it!!! It has a dressing of some sort…cumin, olive oil, lime juice I’m guessing?  Hey Tom, if you’re reading, help me out here!!  To. die. for.

I also asked for two more creamy cilantro dressings to take home because hey, I could eat that stuff with a spoon.  Would you like some salad with that dressing ma’am? 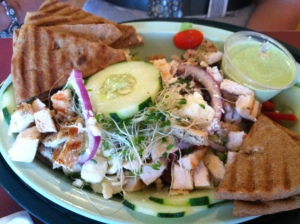 I can’t remember a time when my mom didn’t ask for a side of pita break, “toasted, please.”  In OE style, it was whole wheat, obviously.  But this pita bread wasn’t just yo mama’s pita bread.  It’s crispy on the outside and doughy on the inside, perfect texture, and so darn tasty.  I’m determined to find out the brand and then hoard it.

If it wasn’t embarrassing enough that I went in there twice already, I then proceeded to order some soup for dinner, so I could grace my belly with three OE meals in a row.  Lucky belly.  I ordered the black-eyed pea soup with collards.  It was loaded with corn, carrots, onions, some kind of grain (cous cous maybe?), collard greens and black eyes peas.  It was so flavorful and truly hit the soup spot.  I love how OE always has at least four homemade soups, and they always change!

Later in the day I ran for twenty minutes at 6 and 7 and was super tired by the end.  I haven’t worked out this summer as much as I should, so I figured that my endurance had gone down.  Then I realized that I was on an incline of 2 the whole time, which made me feel a bit better. I also used my workout as an excuse for why I ate like a truck driver and dinner time. Dinner just kept getting bigger. 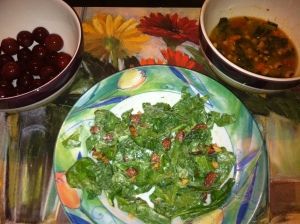 Then I was still hungry, so I had a chocolate chip brownie larabar for dessert. Tear it open, put it in the microwave for 15 seconds, and you have the yummiest, healthiest “brownie.”  Keep in mind–this ingredients are dates, chocolate chips, cocoa powder,  walnuts and almonds, so take it with a grain of salt.  The chocolate chip cookie dough ones are also amazing.  Larabars are a great intro to my rant about reading ingredients…

Then, I was still hungry, so I made a PB & J.  Natural peanut butter and strawberry jelly on a  toasted Trader Joe’s whole wheat cinnamon raisin english muffin.  YUM!

Then my friend Natski gave me a mani/pedi FO FREE. It was beautiful 🙂

charged-up cherry. no, those aren’t my nails.

Day #2 at Organic Energy was darn tasty as well. I ordered the Eggless Crepes, filled with potato and green been curry with sambar and coconut basmati rice.  It was superb.  I actually just finished the leftovers (it was huge) and I drizzled it with, you’re never gonna guess…

Creamy cilantro dressing.   No picture because my computer is taking forreevvvvverrrrr to upload and I’m getting cranky about it.
Anywho, I really want to take a second to talk about reading labels.  First of all, before I forget, get the Fooducate app.  It allows you to scan bar codes of items and then gives it a grade based on its healthfulness.  I love it because a) they have lots of  TJ’s stuff and b) they say that the only thing worth an A would be from a farmer or grown in your backyard.  Now that’s what I’m talking about.
I read this article and I strongly encourage you all to read it as well. It’s called “Beware of less than nutritious products from reliable health food brands.”
Read the article.  Now.
If you thought fiber one brownies were too good to be true, you were right.
What’s the diff between multi-grain and whole wheat? Unbleached enriched wheat flour (aka white flour) versus whole wheat?  Read the label.  If your box of pasta says multi-grain, it’s not 100% whole wheat.  Heck even if it does say whole wheat, it may only contain it, not be 100%.  If you’re looking for whole wheat, it better be the first ingredient (since they are listed by weight) and it better be the only kind of flour.  Get out of here, enriched wheat flour.  You kinda suck.
I am a firm believer in reading the ingredients before I buy anything.  Except apples and banners and all other fresh produce (unless it’s bagged or in a can with funky preservatives and sugary syrups) because GUESS WHAT?
They is what they is.  Nothin’ in an apple but an apple.
You may read the label of a larabar and see 23 grams of sugar.  If you only read the nutrition facts, you would probably steer clear of that sugar laden devil.  But if you read the INGREDIENTS, you’ll see that there is no sugar, agave, brown rice syrup, evaporate cane juice, or whatever–the sugar comes from the dates. In other words, the bar is sweetened with fruit that won’t spike your blood sugar like crazy.  If the first ingredient were agave nectar, then I wouldn’t buy the bar.
If an apple had a label, it would say something like 16 grams of sugar.  HOLY COW! I could have a scoop of ice cream for that!  But keep in mind that this isn’t added sugar.
Be wary of claims on packaged foods.  If it’s boasting about all the fiber and protein it has, then it probably isn’t that great.  You don’t see avocados bragging about their healthy fatty acids, do you?
Read every book by Michael Pollan.  The guy is a genious.

It’s not as hard as it sounds.  If it comes in a box, read the ingredients.  It doesn’t matter if it has ten grams of protein and six grams of fiber.  Because guess what?  The other day I looked at the label of a can of “all white meat” chicken noodle soup and saw soy protein hiding as an ingredient.  You better believe that it’s GMO and you better believe that the protein isn’t coming just from “all natural” chicken.  Companies spend millions trying to convince us that their product is healthy. Don’t fall for it.
Look at Land-o-Lakes butter.  The regular version has two ingredients: cream and salt.
You may have picked up the light version, thinking it’s better because the front says less fat and calories.  There are about fifteen  ingredients in the light version, and a few that you can’t pronounce unless you’re majoring in chemistry. Butter isn’t naturally “light.”  You have to mess with it and add chemicals to make it that way.

Hi foodie friends! Welcome to Hummusapien. I'm Alexis, a 22-year-old dietetic intern and graduate student obsessed with all things food. Join me on the adventure to maximize our healthy potential and maybe eat some hummus, avocado and a bowl of toasted coconut with dark chocolate chips along the way.

I'd love to hear from you! Email me at Hummusapien@hotmail.com